I've spent a good portion of the week reading two fantastic books. I'd love to say I had a couple more books finished off, but what I read was fantastic, and I appreciated not being rushed and savoring how good both of these books are.

With just five or six weeks left in the year, there is a short-list of titles I really wanted to read yet before the end of 2020. 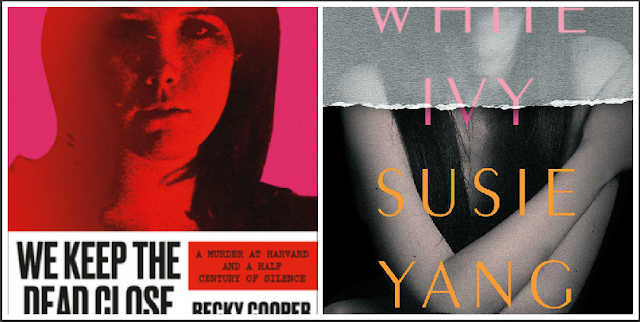 We Keep The Dead Close: A Murder At Harvard and a Half Century of Silence by Becky Cooper - I'm not usually a huge fan of true crime books, although there are a few that I've really been sucked into.  When I heard the premise of this book I was a little bit curious.  And then I started reading reviews and hearing other people's comments after they had read it which made me want to drop everything else and read it right away.  It is true crime but it is also much more than that. Part of the book is somewhat autobiographical about the author and the time in her life when she decided to research Jane Britton's murder.  Part of the book is informational about Harvard- their attitude toward women in the 60s and the anthropology department - and all of it put together masterfully make it really hard to put down.  I spent a great portion of this past weekend reading this book and enjoying every page.  I did have to touch base with my uncle who had been a student at Harvard when Jane Britton was murdered. He admits that he does remember it, but it was a long time ago and he wasn't much affected by it.  I think he would really enjoy reading this book and perhaps reliving some of his college days, recognizing some familiar names and places.  And I think that even if you have no connection to Harvard and aren't particularly into true crime, this is still a book you would enjoy.

White Ivy by Susie Yang - I love good women's fiction, and White Ivy is a book that will stick with me for a long time.  Ivy is a character that is incredibly flawed.  We know her entire life story as she was sent to live with her grandmother while her parents established themselves in the US and then joined them. She has forever tried to fit in and be American, embarrassed by her parents and the ways they are not able to assimilate. She makes bad choices, picks less than desirable men to sleep with, and isn't horribly likeable.  And yet, Ivy is a fighter.  She wants so badly to succeed.  After she becomes an elementary teacher she runs into the sister of a junior high crush and is reunited with Gideon at a party.  He is everything she wanted at one point.  And she realizes that he still is.  There are secrets, more questionable decisions from Ivy, and yet I was rooting for her the entire time.  Ivy will stay with me as I think about her from time to time; I love an author who can create a character that feels so real.

What are the books you want to get to before the end of 2020?