Blast From the Past: November 2010

November of 2010 must have been an amazing reading month. I looked through my book journal this past weekend and so many books I read during that span of time caught my attention.  Here are nine from a decade ago that I'd love to re-read: 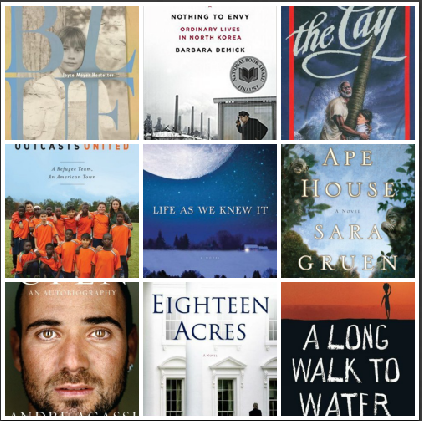 Blue by Joyce Hostettler - this is the first in a trilogy featuring Ann Fay who is helping out at home while her Dad is away fighting Hitler.  When she contracts polio she learns a lot about friendship and perseverance. I loved this book and the ones that followed.  I feel like it's an overlooked gem with so many WWII books out there to choose from.
Nothing to Envy: Ordinary Lives in North Korea by Barbara Demick- I found this non-fiction look at North Korea fascinating. My husband read it recently and just found it depressing.  It is still something I think about once in a while as Demick chronicles the stories of real people.
The Cay by Theodore Taylor- I remember seeing this in my public library while growing up and passing it over every time.  This is one book that has had a lot of really bad covers.  But finally as an adult when I picked it up, I wanted everyone to read it.  This is an amazing book full of some incredible lessons and an excellent plot.
Outcasts United by Warren St. John -  another non-fiction book set in Clarkston, Georgia, where refugees were relocated in the 1990s. This story focuses on the boys and their families who made up a soccer team and found some commonalities despite their different backgrounds.
Life As We Knew It by Susan Beth Pfeffer- this dystopian YA novel probably rings a little too close to the truth as the characters deal with life after a meteor knocks the moon closer to the earth. Weather patterns change -the summer turns to Arctic winter, volcanoes erupt, earthquakes devastate the world.....and in the midst of this Miranda is a teenager trying to survive.
Ape House by Sara Gruen - Gruen wrote Water for Elephants as well, but it is Ape House I really enjoyed.  Isabel, a scientist at the Great Ape Language Lab, cares for several bonobos that she's dedicated her life to.  John is a reporter who brings to television the story of the apes' lives in this lab.  An explosion at the lab and a reality TV show are part of the story of these interesting animals.
Open by Andre Agassi - I grew up watching Agassi play tennis and loved reading his memoir and hearing about his life.  Especially of interest to me was his short-lived marriage to Brook Shields.
Eighteen Acres by Nicolle Wallace -this is the first in a trilogy that I loved. I enjoy pretty much anything that is political fiction and this novel about the first female president, Charlotte Kramer, is entertaining and interesting.
A Long Walk to Water by Linda Sue Park- the seventh graders in my school read this every year and love it. Just a week ago I realized my own eighth grade daughter has never read it. Although she would rather I not read to her any more, I might need to find a way for her to hear this important story that takes place in the Sudan in 1985 and 2008.
Which of these books have you read before? What titles would you recommend from a decade ago?
Posted by Tina's Blog at 10:00 PM