It's time to look back at March 2010 and the books I remember reading a decade ago.  In many ways it is hard to believe a decade has passed. 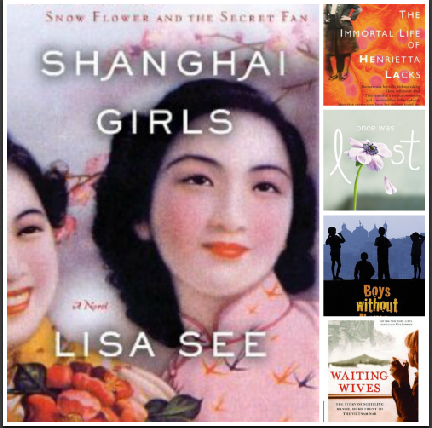 Shanghai Girls by Lisa See - I loved this book by See so much, that even though there is a sequel I just can't bring myself to read it because I just can't imagine it living up to my expectations. Set in 1937 in Shanghai, this is the story of Pearl and May as they try to survive WWII in Shangahi, and eventually make their way to America.

The Immortal Life of Henrietta Lacks by Rebecca Skloot - non-fiction that has been well reviewed....I was thoroughly amazed by the story of Henrietta, a poo black woman from the South whose cells were used without her knowledge to help develop the polio vaccine; uncovered secrets of cancer, viruses, and the atom bomb’s effects; helped lead to important advances like in vitro fertilization, cloning, and gene mapping; and have been bought and sold by the billions. I've got this one sitting on my husband's night stand....he hasn't picked it up yet, but I think he'd enjoy it if he'd give it a try.

Once Was Lost by Sara Zarr - This might be the first book by Zarr I ever read.  I feel like fans of Sarah Dessen will want to know this author. Samara is a PK (pastor's kid). Her dad is more interested in his congregation and her mom is in rehab.  And then a small child from town is kidnapped.

Boys Without Names by Kashmira Sheth - set in India, Gopal needs to help his family survive. He is offered a factory job that he happily takes, only to have been deceived. Instead he works in a sweat shop with some other boys, who seem more like enemies than co-workers. Gopal isn't giving up, though, and is intent on finding a way to escape his new "home."

Waiting Wives: The Story of Schilling Manor, Home Front to the Vietnam War by Donna Mareau - Moreau's book tells the story of Schilling Manor, located in Kansas, a military base set aside for wives and children of soldiers serving in Vietnam. Moreau spent a portion of her childhood at SM, and is able to share what life was like there for this group of women and children.  It provides a unique perspective into this time period and the experiences that these people shared.  I read this one while running on the treadmill, and although it's been a decade since I finished it, do still think about it from time to time.