In January I read two non-fiction books, and had high hopes that I'd get through many more in the next month.  I read three non-fiction books in February, but instead of thinking that that isn't enough, I'm going to be happy with the books I go through.  They were all great. 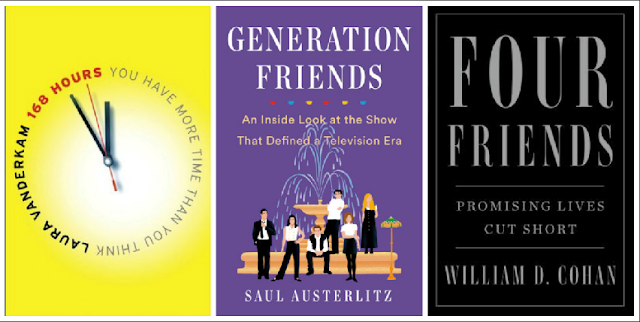 168 Hours: You Have More Time Than You Think by Laura Vanderkam - this is a book that can be read and re-read.  There are so many nuggets of wisdom and ideas for how to better use your time.  I can see by Vanderkam's examples that there are lots of ways I am wasting time personally, and although I might not take every suggestion, there are definitely things I could change.  I listened to this on audio, something I struggle with, but ended up wanting to plug in my headphones and listen.

Generation Friends: An Inside Look at the Show That Defined A Television Era by Saul Austerlitz- Friends debuted my senior year of college. At that point, my social life was much more important than sitting down and watching a sitcom, so I didn't begin watching until Season 2 (don't worry. I've watched and re-watched Season 1 several times by now).  I loved Friends for several seasons, but eventually my interest waned, and I never really watched the last several seasons. However, Friends is the show that will forever be linked to my early adulthood. Reading about the show, the behind the scenes happenings, the various episodes was a little like taking a trip down memory lane.  It almost makes me want to sit down and rewatch the entire series.

Four Friends: Promising Lives Cut Short by William D. Cohan - this non-fiction account of four Andover students whose lives were cut short tragically could almost be titled Four Acquaintances, but for obvious reasons that doesn't have the same appeal as Four Friends. Cohan shares the stories of four individuals who attended Andover with him.  Two are lesser known men who died in tragic circumstances. The other two are the "big names" of the book: JFK, Jr., and Harry S. Truman's grandson, who also died young and tragically. This is such an interesting book and Cohan is able to develop each man's backstory so that I was invested in them.

I'm not sure what March's reading will look like yet.  I've got lots of book stacked up, and I'd love to get to all of them. Unfortunately/fortunately life is busy and sometimes reading is taking a backseat to the events that are happening.
Posted by Tina's Blog at 12:00 AM

what does it take to be a successful author? I would say that initial reviews and marketing definitely boost your book. I used https://usabookreviewers.com to get a few reviews and also promote my book. Hopping to be in the top 100 genre lists and see better sales this Christmas season…