I've had a good week of reading.  I lucked in to a four day weekend since I was sick on Friday and we don't have school today for the Martin Luther King, Jr. holiday.

My girls had a day off of school on Friday as well as some winter weather decided to come to Iowa.  We were a bit stir-crazy by Saturday night, but did finally manage to get out to do some grocery shopping today and have a few things planned for tomorrow. 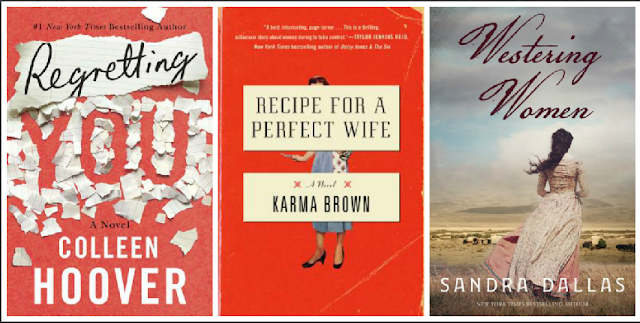 Regretting You by Colleen Hoover- this novel has two narrators, something I enjoy.  We meet Morgan when she is just seventeen and realizes she is going to be a mother.  Clara, Morgan's daughter, is the other narrator, a teenager herself.  As we see how Morgan's life has unfolded, we watch Morgan and Clara struggle with the usual relationship issues that a teen daughter and mother may face, as well as a loss they both feel they may not recover from - and some big secrets it's hard to imagine they can ever understand.  Hoover has some true twists to this story. A few I saw coming....a few surprised me. This book is easy to read and moved fast.  I enjoyed it a lot and can think of several friends who would also find it worth picking up.

Recipe For a Perfect Wife by Karma Brown - I loved, loved this book.  Alice and her husband move from New York City to the suburbs where Alice intends to write a novel while Nate commutes to work.  The house they've bought needs some fixing up and when they move in, Alice finds a cookbook the former resident left behind.  Nellie lived in Alice's house in the 1950s and we learn of her inability to have a baby with her husband, Richard, who is abusive.  Alice learns more about Nellie as she reads some letters that are discovered from Nellie to her mother, and I was intrigued by both storylines, rooting for Nellie to find happiness, and groaning inwardly at Alice's decisions.  There was plenty to keep me turning the pages and I loved the story, characters, 50s setting and nostalgia of that time.

Westering Women by Sandra Dallas- Dallas is a go-to author for me. This latest from her tells the story of a group of women who are accompanied by some pastors as they make their way out west to California with their covered wagons and oxen. There are struggles along the way, and the women rise to every challenge they face. As the story unfolds their bond grows stronger so that when Maggie is confronted with her past, these women stand with her as she faces the one person who nearly destroyed her.  This novel includes Dallas' signature clever twist, and this was a pleasant story to curl up with as the snow fell outside.

I'm not sure what I'll find to read next.  There are plenty of things to choose from and it's always hard to pick.  I've had such great choices lately it's hard to think I will find another book that will be as enjoyable.

I happen to have all three of these books on my Kindle right now. Hope to get to each of them before too long. Have you read any other of Karma Brown's books? They all have looked good to me, but I've not ever tried one. Sandra Dallas is a favorite from way back. Tallgrass and the Persian Pickle Society are favorites. And Colleen Hoover is a new author for me - to read anyway. Hope you're feeling better. Everyone in our area is sick and I'm trying to stay well without being too over-the-top germphobic - ha!