Monday Mini-Reviews: Hard To Do Better Than This

The last two books I've read have both been fantastic.  Both are slated for release right at the end of the year/beginning of 2020, and are not included in my best of 2019 post... and I fear that by the end of 2020, these will be overlooked since they weren't read in that year.  However, these books deserve some attention.

Last night after turning the last page of Long Bright River I knew I was going to have a hard time starting something new.  I'm still debating what I should pick up next and quite honestly, I can't seem to find anything amidst all my TBR piles that even looks remotely interesting.  I've got a bad book hangover. 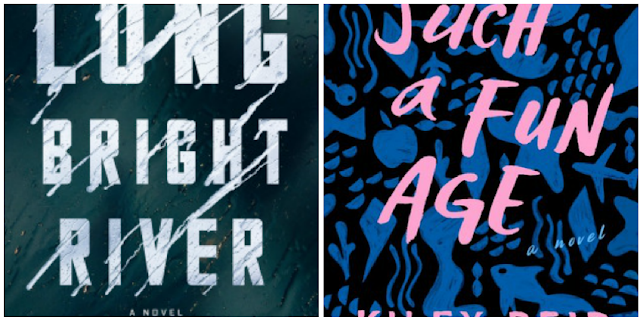 Long Bright River by Liz Moore is a story about two sisters, told from the perspective of the older sister, Mickey.  She and her younger sister, Kacey, were raised by their grandmother after their mother became addicted to drugs and died. Now Kacey uses herself and the two really don't talk.  Mickey's a cop, and she does run into Kacey occasionally.  When she realizes she hasn't seen her sister in over a month and there is a string of murders of young women who are addicts, Mickey sets out to find her sister and in the process becomes involved in finding out who is killing these women.  This was a page turner.  I couldn't wait to see where the story was going next, and although it was fast paced, there was a lot of character development as well as action.  I loved that this moved from then to now, giving a fuller picture of the sisters' lives before they became estranged.  Moore's resolution to the story is perfect as well and although no sequel is coming (it really doesn't need one), I do wish I could check in on Mickey and Kasey again.


Such A Fun Age by Kiley Reid - this book has been getting buzz for a while and will release on December 31.  I've had a copy since Book Expo in May, and each time I hear about it, intend to pick it up and read it. Finally, with the publication date looming, the time was right.
Emira is working part-time doing translations and part-time as a baby-sitter for Briar, a little girl whose mother started her business as a blogger but has marketed herself into her own brand.  Alix, Briar's mom, seems to have it all, yet she is struggling with the demands of her job, motherhood, and a move to the suburbs.  When she sends Emira to the grocery store late one night with Briar, Emira is confronted by the store's security guard and accused of kidnapping the girl.  This event becomes the focus of Alix's attention as she attempts to make things right with Emira.  However, when someone from Alix's past shows up at her front door one day, Emira is confronted with ideas about race and the intentions of others (perhaps implicit, perhaps more direct) that are hard to think about and realize.  This is definitely a book that is worth discussing. I have so many thoughts and feelings about the characters in this book and Reid's ability to put into words some tough ideas that are often swept under the rug.  I can't wait for people to read Such A Fun Age and start the conversation.

I'm not sure I'll be able to pick up anything that will compare to these two books in the next week.  I've got plenty to choose from, but I'm enjoying sitting here pondering both of these fantastic novels.
Posted by Tina's Blog at 5:21 AM