2022 is starting out with some fantastic reading. I'm not sure when I last read two five star books back to back, but it happened this past weekend.  I was lucky enough that I didn't have anything scheduled for Saturday or Sunday, so I did find some extended periods of time where I could just sit on my couch and devour these books. 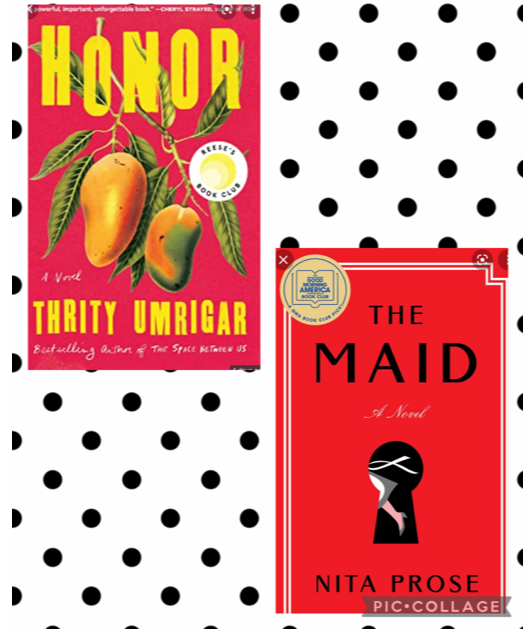 Honor by Thrity Umrigar- I've read Umrigar before and enjoyed what  I read.  This one has also been selected by Reese Witherspoon as her January book club pick.

Smita returns to India, her homeland, after spending two decades in America. Now a reporter, she has come to finish up a story her friend, Shannon, was writing before she fell and broke her hip.

Meena is awaiting a verdict in the trial of her brothers who killed her husband and disfigured her when they set her hut on fire.  Meena is a Hindu woman who married a Muslim man, so angering her brothers that they retaliated.

I have known there is a Muslim/Hindu conflict, but didn't have a lot of information about this. Umrigar explains this well within the story.  Smita tries to come to terms with the parts of India she loves and the parts that she doesn't, while she finally deals with the situation that sent her family to another country to start over.

Umrigar does start out a bit heavyhanded (IMO).  I am not a fan of books where the author feels the need to weave in their own political opinions.  However, by the time I was halfway through I couldn't put this book down as I wanted to know how Meena's story unfolded

The Maid by Nita Prose- I love a good mystery and I love a unique protagonist and The Maid has both.

Molly is a maid in a ritzy hotel and takes great pride in her work.  When she enters the Black's suite to clean it, she finds Mr. Black in bed - and then realizes he is no longer alive.

Molly cleans the room, anyway, and matter of factly reports his death.  There is definitely something fishy going on, and although Molly thinks she is getting better at reading people's facial expressions, she is missing out on a lot of devious behavior going on right before her very eyes.  And suddenly - Molly is the person they are bringing in for questioning in connection with Mr. Black's death.

For lack of a better way of describing it, I found this mystery to be fun.  Molly, without trying, brings humor to this story.  And as many reviews have already stated, it feels a little bit like you are in a game of Clue.

Prose ties everything up well, but I wish there would be another opportunity to reconnect with Molly at some point.

Have you had any 5 star reads yet this year?  I'm pretty pleased with how 2022 is unfolding so far.

My new library here just got The Maid and I'm on the list for it. Will definitely look forward to reading it. Happy New Year to you and your family! Take care!

I wasn't prepared for how dark Honor would be at times. Maid on the other hand is starting out rather fun. Glad you seemed to enjoy these.