Non Fiction November: Week 1: Looking Back At the Nonfiction of 2021

It's time for Nonfiction November again! I love reading all the posts about great nonfiction books and adding to my TBR stack.

This first week is hosted by Rennie at What's Nonfiction?, so head on over there and check out the other posts highlighting this year's best nonfiction reads.

These ten nonfiction books are ones I enjoyed a lot while reading them - and still think about them now, even months later. 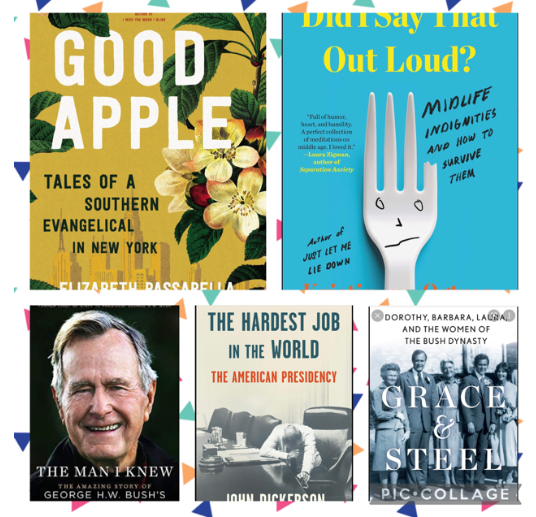 Good Apple: Tales of a Southern Evangelical in New York by Elizabeth Passarella

Did I Say That Out Loud? Midlife Indignities and How to Survive Them by Kristin van Ogtrop

The Man I Knew: The Amazing Story of George H.W. Bush's Post-Presidency by Jean Becker

The Hardest Job in the World: The American Presidency by John Dickerson

Grace and Steel: Dorothy, Barbara, Laura and the Women of the Bush Dynasty by J. Randy Taraborrelli 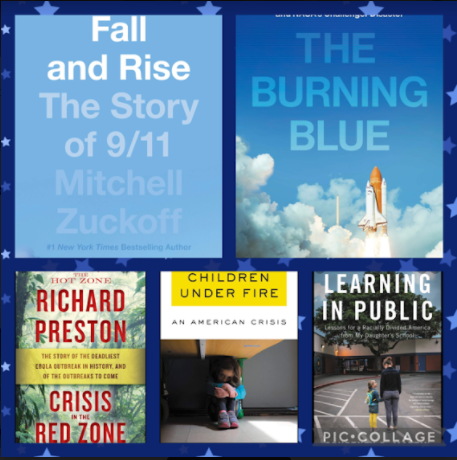 Fall and Rise: The Story of 9/11 by Mitchell Zuckoff

The Burning Blue: The Untold Story of Christa McAuliffe and NASA's Challenger Disaster by Kevin Cook

Crisis in the Red Zone: The Story of the Deadliest Ebola Outbreak In History, and of the Outbreaks to Come by Richard Preston

Learning in Public: Lessons for a Racially Divided America From My Daughter's School by Courtney E. Martin

There are still two months left this year and I've started a couple nonfiction books that could very well be in my top ten list at the end of the year. Happy nonfiction reading!

So many interesting books here!!

I added Children Under Fire, Fall and Rise, and Learning in Public to my wishlist. Thank you so much.

I read (and enjoyed?) The Only Plane in the Sky and have seen Fall and Rise on several lists, so I'm adding it to my TBR list. I won't get to it this month, but I'll look for it in 2022, maybe on audio. Thanks for all of your recommendations!

Did I Say That Out Loud? Is one I hoped to get to this year. Thanks for sharing your recommendations

These are great recommendations I wish I could read faster... there are so many I'd like to try.

Wow, important titles here. I'm curious about the one on Ebola.
My post is here https://wordsandpeace.com/2021/11/05/nonfiction-november-my-year-2021-in-nonfiction/

What an interesting range of nonfiction you had this year! I loved Crisis in the Red Zone when I read it. All of Richard Preston's books have been great, I thought. I'm adding Fall and Rise to my list, I hesitated on it for awhile because I know it'll be tough but I keep seeing it around this year!