It's time to look back at my reading from June 2011, which although a decade ago, I still remember fairly well. 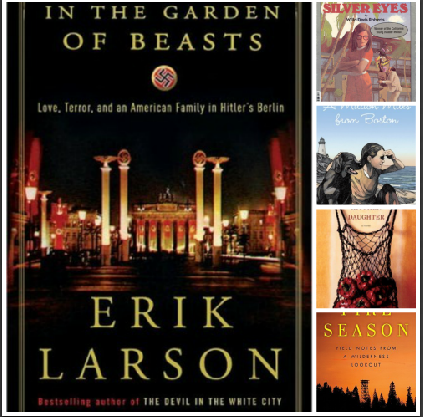 In The Garden of Beasts by Erik Larson is my favorite of Larson's non-fiction books. Always well researched, this one focuses on the American ambassador to Nazi Germany, William Dodd.  Dodd tried to get the attention of the American government with little result as Hitler continued his rise to power. As Larson relates the events that led to Dodd's assignment in Germany, Dodd's daughter Martha's friendship with high ranking Nazis, and Dodd's increasing concern over Hitler's ruthless quest to eliminate Jews, readers are able to witness how America might have stepped in earlier if they had been paying attention.
The Girl With the Silver Eyes by Willo Davis Roberts - I read this back in the early 1980s and have read it to my own children and with book clubs over the years. I love how Katie is able to move things with her eyes, and how somehow this all relates back to a job her mother had while pregnant with her.  This book has been around for a while, but kids today still enjoy it.
A Million Miles From Boston by Karen Day - Lucy and her dad are heading to her favorite place for the summer: Pierson Point, Maine.  This summer is different from the others, though, because Ian, a boy she can't stand from back home is also vacationing in the same place.  Lucy's worried about Dad's girlfriend wanting to spend more time with her and about middle school.  This is a great middle grade novel and readers will find it easy to relate to Lucy.
The Kitchen Daughter by Jael McHenry- McHenry grew up in the neighboring town where I once taught, so I was thrilled to get to read her work (this novel was even mentioned in Oprah's magazine), which was fantastic.  Ginny enjoys cooking and has always lived at home with her parents, but when they both die, she is left in her mid-twenties alone in their house - except for the ghost of Nonna who talks to her as she cooks her recipes in the kitchen. There's a little magical realism in this book, but even though that's not necessarily my thing, I loved this story.
Fire Season: Field Notes From a Wilderness Outlook by Philip Connors - Connors spends half of each year keeping vigil over 20,000 acres of land in New Mexico's Gila National Forest in a tower 10,000 feet above sea level. I remember finding his lifestyle and job fascinating - and dangerous.
These five were great back in 2011 when I first read them and I'd happily press them into anyone's hands today.  Have you read any of these books?  What were you reading back in 2011?  Last year in June?
Posted by Tina's Blog at 10:00 PM