I ended spring break having read an amazing amount of books.  And then, I could tell I was about to hit a little bit of a slump.  I spent almost all of last week reading the same YA historical fiction novel.  I hate when I'm moving that slowly through a book.  But, it was good, and I kept reading and by Saturday morning I'd finished it up. That gave me just enough time to squeeze in another historical fiction novel over the weekend. 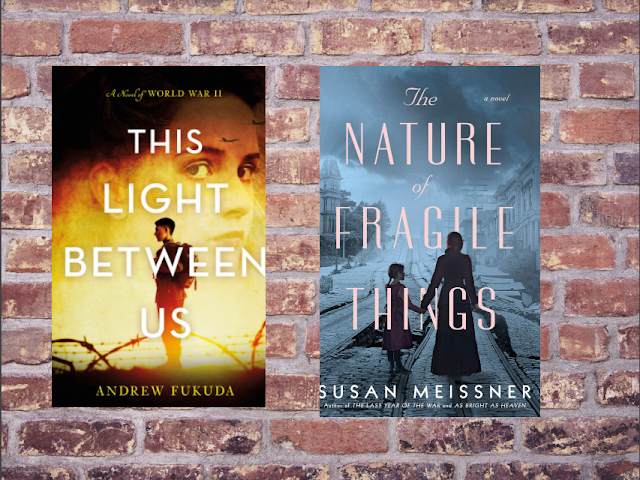 The Light Between Us by Andrew Fukuda- Alex, a Japanese American boy living on Bainbridge Island begins writing Charlie a Jewish girl from France through a school pen pal program. Although he's not very excited about having a girl for a pen pal, the two write for years, Alex eventually getting over his initial problem with writing to a girl.  In fact the two become best friends, confiding their deepest secrets to each other, and holding on to the letters they received as a lifeline as war breaks out.  When Alex is sent to an internment camp for Japanese Americans, he looks forward to hearing from Charlie, who is soon hiding in a small room with another family.  And then the mail service in France shuts down.  Alex decides to enlist, part of his reason being so that he can find Charlie. The war scenes are graphic and I found the ending to this book to be heartbreaking, but oh, what a great book it was.  I've got a group of students that read WWII books and I can hardly wait to press this one into their hands.

The Nature of Fragile Things by Susan Meissner -Meissner has become an author whose work I read as soon as I can get my hands on it.  This book is set during the San Francisco Earthquake.  The time period is important but not as much a factor as it was with the the Light Between Us.  Sophie is a mail order bride, moving to San Francisco from New York to marry Martin, a widow, and care for his young daughter, Kat.  But despite the fact that she quickly falls in love with Kat, Martin is distant.  When a woman shows up at Sophie's house revealing that she is also married to Martin, the two women begin to discover the many secrets that Martin has been keeping -and that he is not a nice man at all.   I knew where this story was heading long before it was over, but I still enjoyed it a lot. This one reads fast and is hard to put down.

I've already started another book and I'm hoping I find some reading time this week.  We've got the first track meet of the season, three days of working late, and a dinner and reception tonight at school. So that extra reading? Might just be a dream.

What did you read this weekend? Have you read either of the books I shared?

Because we were visiting with my son and Sunday was busy with church and youth group, I did not read one page and could feel a slump coming on even though I am right in the middle of We Begin At The End which is fabulous so today, with renewed focus, I dove back in. Also, WordPress changed they way we write posts and it's messed up all of my scheduled posts but I think I have it fixed now. That took up my reading time, trying to figure it out.