It's so hard to select the best books I read in 2020 when there were so many great choices.  This is the first year in several that I read whatever I wanted, whenever I wanted.  No blog tours, no reviews for Amazon.  And it has been great.  I've also read less this year than many others.  I finished the year having read 200 books.  That's a lot by most people's standards, but it certainly isn't my best reading year.  At least in terms of numbers.  But maybe it has been one of my best reading years in terms of my enjoyment of what I read.  So, I was a little bit generous with my list this year.  Instead of picking ten fiction titles, I've allowed myself 16.  And even with that, there are still more that I think are great that aren't getting mentioned.
Maybe you've read a few of these, or maybe you're looking to add to your TBR.
Enjoy! 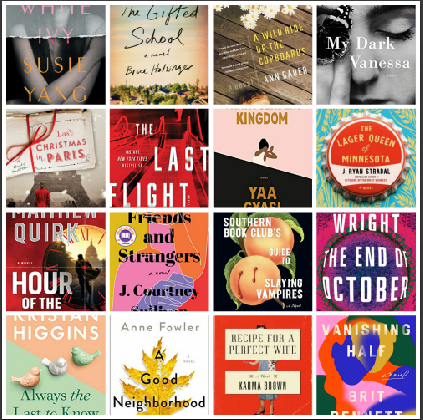 1. White Ivy by Susie Yang - this was a Jenna Bush Hager pick; Ivy isn't a likeable character, but she is one I'll be thinking about for a long time.  Ivy tries her best to distance herself from her Chinese family - trying to fit in to American society. She also isn't above lying and stealing to get ahead in life.
2.  The Gifted School by Bruce Holsinger- I love books with school settings. This is a perfect story about ambitious parents who will go to great lengths to help their children succeed.  Class, ambition, talent, and ethics are all a part of this novel.
3.  A Wild Ride Up The Cupboards by Ann Bauer- I've had this one on my shelves for years - and it was well worth the wait.  Somewhat autobiographical, Bauer's story is of a mother whose oldest child is having some undiagnosable issues and the way that impacts her marriage.
4.  My Dark Vanessa by Kate Elizabeth Russell- this is a story that you won't soon forget.  Disturbing is the word I would use to describe it, but I found I couldn't put this down, as Vanessa, a high schooler begins an affair with her high school teacher that impacts her entire life.
5.  The Last Christmas In Paris by Hazel Gaynor and Heather Webb - this is an epistolary novel that despite the word 'Christmas' in the title has nothing to do wit the holiday and can be read year round.  Taking place during WWI, Evie writes her brother Will and his best friend Tom after they leave to fight.  She continues to write Tom for years and their relationship develops through letters.
6.  The Last Flight by Julie Clark - I read this novel in one sitting and loved the suspense.  Claire Cook's life looks perfect from the outside, but she's been plotting for a long time how to leave her politically ambitious husband without him finding her.  When she is approached by a woman at an airport, the two change places on flights going to different destinations.  There is secret upon secret that continue to come out as the story develops.
7.  Transcendent Kingdom by Yaa Gyasi - Gifty is trying to hold it all together and understand the suffering that she and her family have endured. Her mother is suicidal, her brother died of a drug overdose, and somehow Gifty has managed to succeed as a neuroscience student at Stanford -a feat that is amazing considering her background.  This has been on every "Best Book" list in 2020, which is well-deserved.
8.  The Lager Queen of Minnesota by J Ryan Stradel- I don't like beer at all, but I do love this book which features various members of an estranged family that are all drawn into the business of beer brewing and running a successful business.
9. Hour of the Assassin by Matthew Quirk - a quick, suspense-filled novel with short chapters that all seem to end on a cliffhanger.  Nick is a Secret Service agent who has a new assignment: protecting the former CIA director. But from just moments into the initial meeting, things go wrong and Nick isn't sure who he can trust.
10. Friends and Strangers by J Courtney Sullivan- this is another Jenna Bush Hager book club pick; a character-driven novel about two women and their uneasy friendship. Elizabeth is a new mom who has moved to the suburbs from the city in need of friends. When she hires Sam, a college senior to care for her child she and Elizabeth grow close, but it soon becomes obvious that there are differences in the lives of these women that may be too big to bridge.
11. The Southern Book Club's Guide to Slaying Vampires by Grady Hendrix -this sooo out of my wheelhouse and I loved every page.  From the 90s setting that was nostalgic to the vampire that shows up as a friendly, handsome stranger in their neighborhood, I loved absolutely everything about this book.
12.  The End of October by Lawrence Wright - this story rings so close to our current reality.  I might have called it dystopian before 2020, but when a pandemic sweeps the globe, the characters in this novel do their best to survive.
13.  Always The Last To Know by Kristan Higgins - I love a good family drama and this fits the bill. I can't believe I haven't read anything by Higgins before. As Barb and John near their 50th anniversary, Barb can't help but think about how unhappy their marriage is. Their daughters Sadie and Juliet have never exactly been close, either, and when John suffers a stroke the family struggles through their differences.
14.  A Good Neighborhood by Therese Fowler- Xavier is a biracial boy growing up in a North Carolina suburb with his single mom. He's planning on heading to college in the fall. When the Whitman family moves in next door and Xavier and their daughter secretly start seeing each other, it quickly becomes obvious how the Whitmans feel about skin color.  This book is heartbreaking.
15.  Recipe For a Perfect Wife by Karma Brown - Alice leaves her job in the city and moves to the suburbs with her husband.  It's boring sitting around the house while her husband is at work, but when she comes across a cookbook from a previous owner written in the 1950s, Alice becomes curious about the woman who lived there before her and whose notes in the cookbook provide some clues about her tumultuous marriage.
16.  The Vanishing Half by Britt Bennett - this is Bennett's sophomore novel and is perhaps even better than her first book.  The Vignes sisters are identical twins but as their lives unfold and they lose contact with each other, one sister lives in her hometown with her black daughter, and the other lives with her white husband because she's been passing.  Their lives are still intertwined despite both time and distance.
Have you read any of these books? What are the best books you've read in 2020?
Posted by Tina's Blog at 10:00 PM

I've got a few of these books on my Kindle already and will remind myself what you thought about them. I just finished my first book for 2021 and it was OK, but certainly not stellar at all. Trying to decide what to read next. Maybe one of the ones you mentioned. I actually had a normal year for number of reads, but I set aside so many books. We'll hope for better focus in 2021. Happy New Year to you and your family!!

I’ve read three and several are on my to-read list for this year.

I’ve read three and several are on my to-read list for this year.

I've read and enjoyed (5) from your favorites list. Need to check out the rest.