It's been a week of good reading.  I've got some extra projects at work right now that I've been spending some of my evenings on, and we were gone two nights in a row at the state volleyball tournament, but I did actually get in some free reading.

These three are titles I would happily hand off to anyone. 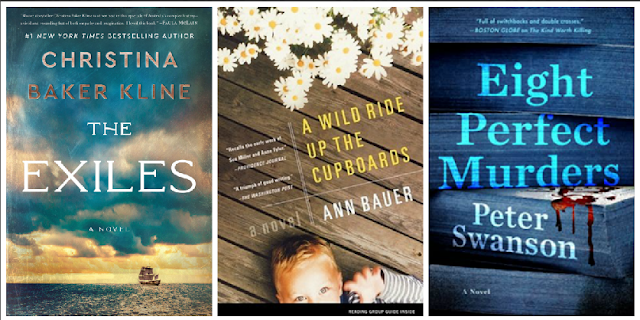 The Exiles by Christina Baker Kline is a historical fiction novel set in England in 1840 where Evangeline, a governess, falls in love with the wealthy son of the family she is working for.  When they accuse her of stealing she is shipped off to what is now called Australia, where convicts were sent to spend their imprisonment.  There is plenty of heartbreak in this story, but it is easy to read, and enjoyable, and there's hope in it as well.  I read nearly the entire novel in one sitting.

A Wild Ride Up the Cupboard by Ann Bauer- first of all, this has been on my shelf since 2005, just waiting to be read.  I love that I've had time to explore some of the books that I've held on to for years.  Who says you will never read them after a certain point?!  Bauer's novel is somewhat based on her own family situation, although I have no idea how close or far this is from her own reality.  Rachel and her husband, Jack, have three children and seem to be living the American dream.  However, money is always a problem, and when their oldest son, Edward, starts retreating into himself when he is four, they are left with the task of trying to sort out what has happened to him and how they can fix it.  I love good literary fiction and Bauer's got it nailed in this novel.  I also loved the Minneapolis setting and  the way she develops the relationships between her characters.  I absolutely love Bauer's writing and am sad she has just one other novel for me to enjoy.

Eight Perfect Murders by Peter Swanson - Swanson never disappoints and this novel is fast and full of suspense.  Bookstore owner, Mal, wrote a blog post long ago detailing eight perfect murder books.  Someone is now committing murders using these eight books as a guide - and they want Mal to know that's what they are doing. The FBI's involved, and despite liking Mal, he's not as innocent as he may seem. He's also got plenty of secrets.  I wondered if I would need to read the 8 murder mysteries this book uses, but despite my lack of familiarity with them, it didn't detract from my enjoyment.  Swanson is one of my go-to suspense authors, and this one is worth every minute.

I'm hoping for another week of good reading....the weather looks to be a little colder (ok....a lot colder), and with it getting dark so early, I definitely have more time sitting around in the house in the evenings.

I loved Eight Perfect Murders and purchased a few of the books mentioned - which I also enjoyed: Double Indemnity and Malice Aforethought. I have The Exiles and have to check out the other that you loved.

I have read one other Swanson book and enjoyed it. I like his writing style.