I've had lots of new books coming into the library lately and have been trying to read them (instead of having them stacked up in my office) as quickly as I can.  I love historical fiction and love learning about various events in history through a novel rather than in a textbook.  Here are three you don't want to miss: 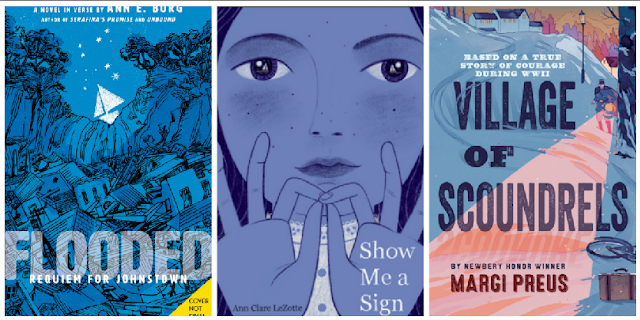 Flooded: Requiem For Johnstown by Ann E Burg - first of all, I love Burg's other books. She does novels in verse so well and this one is no exception.  Burg's newest novel focuses on the flooding in Johnstown, Pennsylvania, where a dam burst in May of 1889, unleashing tons of water on residents of the town situated below the dam.  Thousands of Johnstown's residents died in the disaster.  Burg allows several different characters to tell the story, which is heartbreaking, and includes some additional historical information at the end.

Show Me A Sign by Ann Clare LeZotte - Mary is growing up in what is now Martha's Vineyard in 1805, part of a settlement that has an unusually large amount of deaf people. When a stranger comes to their community to do research, he asks lots of questions - but also intends to take a "live sample" home with him.  Although deafness is not viewed as a disability where Mary lives, she soon realizes that in other places, she is thought of differently.  LeZotte is deaf herself and she is able to bring such authenticity to this story as she has her own life experience to draw on.  This novel is also based on a community that really did exist on Martha's Vineyard which I found fascinating.

The Village of Scoundrels: Based on a True Story of Courage During World War II by Margi Preus- there are so many WWII books out there already, and yet, there are always more incredible stories of people who displayed great bravery and resilience.  This is a remarkable story of some French villagers who helped save the lives of many Jews. This book has lots of characters to keep track of (I did appreciate the list at the book's beginning), and plenty of suspense as a police officer keeps his eye on the comings and goings in town and the Gestapo eventually arrive, surrounding a building, ready to catch the teenagers who they believe are helping the Jews that have been hiding in town.  This is a great story of an actual event and at the book's end there is a fairly extensive author's note that gives the details, including which character represents which person in history.

I've got plenty of books at school still stacked up in my office, but I'm glad I found time for these and can't wait to hand these off to my students.

I agree about the Great Wars. So many books each different, each giving another perspective of the war and each very good. This one sounds equally interesting.