Monday Mini-Reviews: It's Not Monday Anymore

This is the last week of true summer break - which we moved into after our long Covid-19 spring break.  It seems incredible that we could actually be going back to in person learning, but as of today, that is truly the plan.

My reading has picked up a bit these past few weeks, which is a bit unfortunate that it's taken me until the end of summer to really get in the groove.

Today we are still without cell phone service after a derecho (a new weather term to me) moved through Iowa yesterday.  Although we have no damage here, many, many people have horrible damage.  My husband heard that 40 cell towers went down, so it may be a while before things are back to normal.  Much of the day we also had no internet.  Being without both cell service and the internet was rather eye-opening as I reached for my phone nearly constantly.  Perhaps I need to unplug more often. 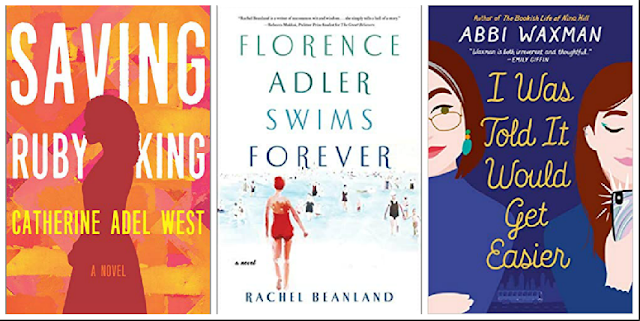 Saving Ruby King by Catherine Adel West - this is a book I've been seeing around a bit. I liked it, but I'll admit that I probably am enjoying it more now after a few weeks because I've thought about it since then.  Ruby King's mother is murdered in their southside Chicago apartment.  Although the police do show up initially, they basically chalk it up to standard violence in the black neighborhood.  Ruby's best friend, Layla, is warned to stay away, and there are lots of secrets in this story as Layla's and Ruby's families have been tied together for several generations.
Florence Adler Swims Forever by Rachel Beanland- only a few pages into the story, Florence Adler, an accomplished swimmer who has plans to swim the English Channel, drowns.  Her parents decide that they will keep her death a secret because they are worried that their older daughter Fannie who is on bed rest will lose the baby she's carrying.  Set in the 30s, I loved the Adlers, a Jewish family. I also loved the subplot which involved Mr Adler helping an old friend try to leave Germany because of the persecution Jews were already facing in the early to mid 1930s.  The author's note at the end cemented my love for this book, which was based on a true story in the author's family.
I Was Told It Would Get Easier by Abbi Waxman-  I love this author more with every book she writes.  This one especially is one I could relate to as the mother of three teenage girls.  Jessica takes her daughter, Emily, on a tour of East Coast colleges with a tour group. She's hoping for some time together to reconnect, while Emily is hoping for a little freedom.  Emily's not sold on college, especially as she sees how hard her mom works as a lawyer.  I loved the various college locales, the idea of a tour group that took families on college tours, and the mother/daughter relationship.  I can hardly wait for more from Waxman.
I'm hoping for a week filled with good books as I get ready to head back to work.  What are the plans for schools in your area?
Posted by Tina's Blog at 5:07 PM

No cell service is a biggie these days; more time for everything if that happens. Florence Adler is on my list; I love the sound of it. Hope your school year is a good one. Only remote learning here until at least November.

Oh wow. Florence Adler sounds like a downer of a story. I had no idea. I love that cover though.

I was wondering about that weather term. I have not heard of it before and even Trump used it the other day. We have a huge fire going on right now. It's so bad it has affected our weather so it's gloomy and looks like it could rain which would be great.

Online school for the high school is going well so far. My campus begins classes on 8/22 so I have been pretty busy setting things up for the semester. I don't mind busy but so much of it could have been done earlier but I only get the go-ahead right before classes it seems.

Sorry about your tech woes. Can't believe that you're almost back in school! Several of our districts started today and more will in the next week or two. Almost all of online only right now, but will transition to online or in-person in a few weeks. Parents get to choose which.

I'm looking forward to reading the Waxman book. Sounds like a good one.