In just a little over a month since I shared my summer reading list, I've made quite a bit of progress.  I've become accustomed to not reading very many books on the list I share each summer, but this year I've surprised myself. 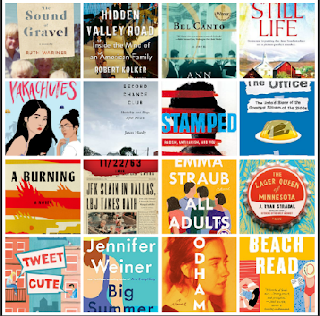 Of the sixteen books I picked, I have already read nine (number 10 and 11 are in progress).

Here are some brief thoughts on the books I've already read:

The Second Chance Club by Jason Hardy- this is a non-fiction book that is part-memoir/part look at the probation system in New Orleans.  Hardy left education for to take a job as a probation officer and the experience was eye-opening.  I

Stamped: Racism, Anti-Racism and You by Jason Reynolds and Ibram X. Kendi - this is the young adult adaptation of Kendi's book, and is so easily readable that I raced through it in just two days.  This is thought-provoking and I can easily see it being used in the school curriculum.

A Burning by Megha Majumdar - this is Jenna Bush Hager's June book club pick that follows three characters in modern day India. Jivan is accused of a terrorist attack after she makes some careless comments on Facebook, her PE teacher, PT Sir, has aspirations of his own, and Lovely, an actress holds the key to Jivan's freedom in her hands.

All Adults Here by Emma Straub - I love a good dysfunctional family story. Astrid, the matriarch, has secrets of her own as do all of her children.  My Monday Mini-Review post is here.

The Lager Queen of Minnesota by J. Ryan Stradel - I absolutely loved this book set in Minnesota about a family and their connection to beer brewing.  My full review is here.

Tweet Cute by Emma Lord is a cute little romance a la You've Got Mail.  Pepper and Jack can't really stand each other in person. Their families own competing burger joints and the two engage in a bitter Twitter war. However, they also are texting each other on a platform Jack developed where they remain anonymous, and become good friends there.  Obviously their true identities are eventually revealed causing all kinds of drama.

Big Summer by Jennifer Weiner- I read everything Weiner writes and this one was a fast and fun little mystery with some romance thrown in.  Daphne is shocked to be asked to be a part of ex-friend Drue's wedding, and even more shocked when Drue turns up dead the day of her wedding.  Daphne had met a mystery man the night before that swept her off her feet, but he is now missing, and there are plenty of questions about his identity and whether or not he is involved in Drue's death.

Rodham by Curtis Sittenfeld- I loved Sittenfeld's American Wife which was a fictional look at Laura Bush.  This is, of course, a fictional look at Hillary Clinton.  While I enjoyed the idea of what Hillary's life would be like if she had not married Bill, I didn't love this novel quite as much as I wished. Still, this was a solid four - or four and a half star- read for me.

Beach Read by Emily Henry- this is a fun rom-com about two authors, January and Augustus who have long been rivals from their college days in writing classes, but who are both experiencing writer's block and living right next to each other.  Both have a few things they need to work through, but their hatred for each other doesn't last long....

I'm feeling pretty good about where my summer reading is right now.  I'm currently working my way through 11/22/63. It's a chunkster and that is making it difficult....I'm enjoying it, but am also wanting to get to the stacks of books I still want to read.  We had graduation for my oldest daughter yesterday which has taken up quite a bit of time, and we are still attempting to plan a party despite Covid-19.

Here are a few graduation pics:

You are doing really well with your summer reading.

Also, congrats to your daughter! Looks like it was a lovely ceremony. I know you were concerned about the lack of masks but outside, hopefully enough air was circulating to make it safe. I really feel pretty safe outside. That picnic my youth group had was outside but it was 107 degrees and I was dying in my mask but we wore them when not eating or drinking. Spaced ourselves out too.

We are having a heat wave here and with it being Monday and all I find myself moody. Trying to redirect and focus on other things.

Your girls are so grown; nice family pictures.

I've been doing great with my summer list as well and have finished all but one. I do feel like I'm in a bit of a slump this last week.

Oh, love the pictures! I cannot believe that your oldest has graduated high school. Where does time go? Wonderful pictures as I said. Yes, your reading has been moving right along and I appreciate your little reviews to whet my interest or maybe push me to start a book I already have. Take care!