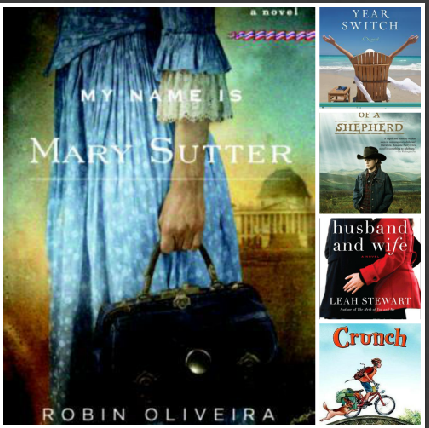 My Name is Mary Sutter by Robin Oliveira is one of those books that I have thought about many times over the past decade. I'm never sure what exactly makes some books stick in your mind more than others, but this is one that has.  This is set during the Civil War, and Mary Sutter wants to be a doctor. However, that career choice isn't open to women.  She manages to make it to the front lines of battle where it becomes obvious that no one has thought about what will happen to the wounded or dying.  The medical care (or lack of it) and the lack of knowledge about the spread of germs was something that was both fascinating and horrifying.  There has since been a sequel to this first book, something I should pick up sooner rather than later.

Seven Year Switch by Claire Cook - sometimes I remember specifics, other times I just remember a general feeling of enjoyment from a certain book or title.  Any time I see Claire Cook's name, I know I want to read what she writes.  She's written at least a dozen novels that generally deal with women in middle age often delivering some wisdom along with a fun and entertaining story line.  Seeing Seven Year Switch reminds me that it's been a while since I've last had the pleasure of reading her work. I hope that she's got something she's been working on because it's been too long.

Heart of a Shepherd by Rosanne Parry - this is a perfect upper elementary/middle grade read for a girl or guy. I love the relationship Brother has with his grandfather and the way he works - the only thing he really can do -with the hopes for his father's safe return from Iraq.  I loved the ranch setting and the way Parry deals with the topic of war and the children and families left behind.

Husband and Wife by Leah Stewart- This is one of those books that upon reading the synopsis I just have a vague recollection of, and know instantly that I would pick it up again.  Nathan and Sarah are married with two young children. While Sarah works to support the family, Nathan works on a novel.  As his book, Infidelity goes to print, he reveals to Sarah that his novel isn't entirely fiction.  In fact, while he was at a writer's conference, he cheated on her with another writer (and that right there is what would convince me to pick this up again).

Crunch by Leslie Connor- this story is fun, yet there is an undercurrent of something more serious as gas pumps run dry across the country and Dewey is left running the family bicycle shop while his parents are stranded up north, unable to reach home.  Bikes are in hot demand and when bike parts are stolen from the bike shop, Dewey is sure he knows who the thief is. I loved this quirky story that was fun despite a somewhat scary (at least to me) premise.