I've read some really good suspenseful stories lately....mystery might not be quite the right term, but let's not waste time worrying about whether these are novels of suspense, psychological thrillers, mysteries or any other name they might go by. Two of them were fantastic, and the third was average (although had it not been read near the same time as the other two, it might have seemed better). 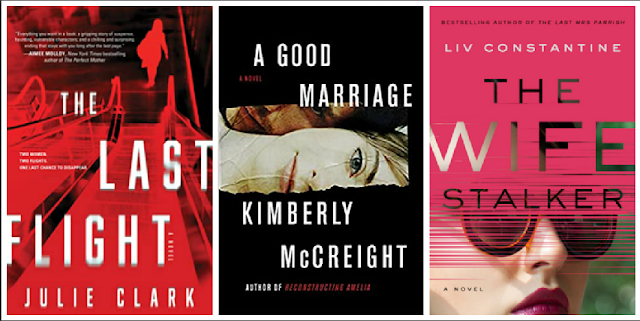 The Last Flight by Julie Clark was a five star read for me in May.  It comes out on June 23, and was discussed at the speed dating event that Carol Fitzgerald hosted virtually at this year's Book Expo.  Claire has been planning on how to get out of her abusive marriage for a long time.  When her plans are thwarted at the last minute, she and another woman at the airport (who also wants a fresh start) decide to switch places on their flights, giving them each a chance to start over.  What Claire discovers is a tangled web of secrets once she deplanes, and things become even more interesting when the flight she was scheduled to fly on crashes leaving no survivors.  This story is narrated by both Claire and Eva, the woman whose ticket she takes, and I absolutely could not stop reading.  This may be the thriller of the summer and I can hardly wait to talk about it with someone.

A Good Marriage by Kimberly McCreight - I loved McCreight's other novels, and this one was also good.  Lizzie's marriage is falling apart, and she's working hard as federal prosecutor. When a former law school classmate, Zach, calls her from Rikers prison after his wife is murdered, Lizzie doesn't really want to take the case, but can't find a way out of it.  There are lots of things that don't add up, and Zach seems less likable the more readers get to know him, yet Lizzie is certain he didn't kill his wife.  McCreight's novel moves back and forth in time and as bits and pieces are revealed it's hard not to want to keep turning the pages faster and faster.  I will admit I had almost figured things out by the end, but this would be a perfect book to bring to the beach.

The Wife Stalker by Liv Constantine- I've loved the other books by this writing duo, and was somewhat disappointed with the Wife Stalker.  However, having to follow A Good Marriage and The Last Flight certainly is a difficult position to be in.  Piper has just moved to Westport, Connecticut, to open a new wellness practice and make a fresh start. When she meets Leo Drakos she is instantly interested in him despite the fact that he's married.  As we learn more about Piper, she doesn't seem to be the type of woman who would make a good stepmother to his two young children, and Joanna is patiently waiting for Leo to come to his senses and return to her, chalking up his relationship with Piper to the fact that he's been suffering from a severe depression.  Even after the resolution to this story I was left with questions and the belief that some of this plot just wasn't believable. I could definitely be in the minority because I'm seeing this one all over the place.  It certainly is a fast read, but if I had to choose, I'd pick one of the other thrillers I've shared this week and skip this one.

What thrillers have you read lately? Anything you want to recommend?
Posted by Tina's Blog at 12:00 AM

A Good Marriage is one I'm waiting for as a download. I do like the sound of it.

Oh, I think The Last Flight sounds good. I'll watch for that one. And I already have A Good Marriage to try. As you know, mysteries are my happy place. LOL