It's been a couple weeks since I shared a re-cap of some of the books I read. Usually I only highlight the ones I've enjoyed, so there are some I read that I never write about.

This past week I've only read really great books and I would recommend all of them to you. 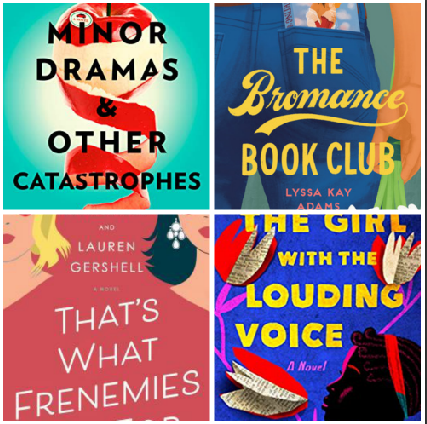 Minor Friends and Other Catastrophes by Kasey West is a debut novel. I am so hoping to hear more from this author. As a teacher, I love a good school story and West has perfectly captured they dynamics and politics of the school system.  There are a variety of characters that narrate each chapter, which centers around someone posting inside information about the high school in order to generate some parent input (none of positive, it seems), and to cast herself in a positive way.  There's an over-involved theater mom, a teacher who is being targeted for teaching multiple perspectives in books, a young teacher who is worried about staff lay-offs, and some student perspectives as well.  I loved, loved this book and was sad to see it end.

The Bromance Book Club by Lyssa Kay Adams - I've had this book sitting around for quite awhile and will admit the title didn't exactly make me think it would be my type of book. But several glowing recommendations on instagram and from various bloggers finally led me to pick it up. It was a perfect read for a snowy weekend with a sick kid.  Gavin Scott, second baseman on a major league baseball team, is struggling. His marriage is in trouble: his wife kicked him out after he pouted because she admitted she'd been faking it the entire time they'd been married.  Gavin's pride is hurt, and he admits he reacted badly to this admission by his wife.  He wants his wife back.  With the help of some guys who convince him that Regency romance novels may hold the key to his romantic success, Gavin sets about courting his wife. This book is a little bit steamy, which made it a fun read, and I excited to see the second in this trilogy is already scheduled for release in March.

That's What Frenemies Are For by Sophie Littlefield and Lauren Gershell is a fun story set in the upper class of New York City.  Julia Summers is living a charmed life. She has everything money could buy, a successful husband, two perfect children, and a beautiful home. But she really wants to impress her friends.  Julia ends up stuck in the city for the summer and starts taking spin classes where she discovers Tatum, the new instructor who Julie decides will be her little "project."  As Julia tries to help Tatum create her brand, she doesn't realize that Tatum has an agenda of her own, and the sweet, innocent, naive spin instructor isn't really that sweet after all.  There are a few twists and turns in this story and plenty of NYC glitz.

The Girl With the Louding Voice by Abi Dare - if you're looking for something a little more literary, this is the book for you.  Set in Nigeria, Adunni is just fourteen and dreaming of an education when her father arranges her marriage to an old man with two wives already.  Adunni doesn't have much choice, and despite her protests and her reminders to her father that he promised her mom on her deathbed that she would get to have an education, the marriage takes place.  Much of Adunni's life is disappointing, and her future doesn't seem all that promising, but despite it all, she continues to believe that she will eventually have a voice.  Even after she is sold into indentured slavery to a wealthy woman, Adunni does not give up.  Her resilience and determination gave me hope as I was reading. I loved this story so much, as well as the facts about life in Nigeria at the chapter's beginnings.  Jenna Bush Hager picked this as her most recent book club pick. She continues to be my favorite celebrity book endorser.

It's not often I read so many fantastic books back to back, so I'm grateful for this stretch of good books and wondering what I can pick up next that will be as good as these were.
Posted by Tina's Blog at 12:00 AM

All new to me and all sounding good.