This past week was full of parent teacher conferences and the state wrestling tournament.  I didn't find a lot of extra time for reading, but the books I read, I thoroughly enjoyed. 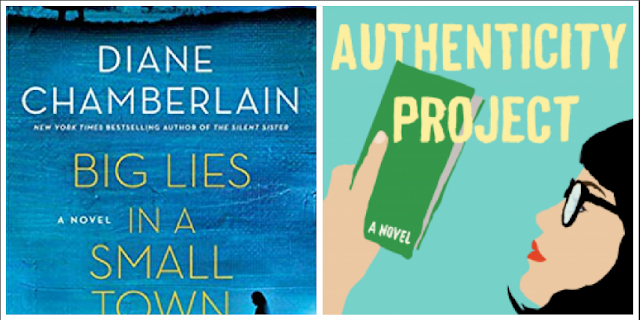 Diane Chamberlain is an author that's been around for a while, but is someone whose work I haven't really thought much about reading. Recently I've seen several bloggers and podcasters rave about various books she's written and there's been nothing but love for her newest novel.  Big Lies In A Small Town did not disappoint.  I loved the dual timeline in this book, one story set in 1940 and one in the present day.  As Morgan is released early from prison to finish a mural for the small town of Edenton, she tries to start her life over after a tragedy derailed her life.  As she paints she becomes absorbed by the picture unfolding in front of her on the mural created years ago by the young artist, Anna Dale.  Anna's story is told in alternate chapters and we see what it was like for her to create a  mural in a small southern town where she was not welcome, with the racism looming over the community she was visiting.  I loved the twists and turns as well as the secrets that were slowly revealed.

The Authenticity Project  by Clare Pooley is a book I've seen a variety of places, but I must not have been paying much attention to anything more than the title, because as I read, I was entirely surprised by what the story was about.  Julian is an old man that frequents the coffee shop run by Monica. He leaves a notebook where he has written some truths about himself, discovered by Monica. She in turn writes some things about herself.  The notebook is passed from person to person, and when Hazard finds the notebook he decides in addition to working on his own sobriety, he will find the perfect man for Monica.  Alice, a mommy instagrammer,  eventually comes across the notebook as well, and she, too, shares some of her innermost thoughts and feelings.  All these characters eventually become connected and intertwined in each other's lives, and I liked seeing where this story was going. Although this took me a bit to get into because of all the things going on this week, I enjoyed it once I actually had time to sit and spend some time reading.

So, hopefully this week is a little less busy.  Everyone has come home from state wrestling, and since I'm writing this on Sunday night, we are getting ourselves organized for the week ahead.
Posted by Tina's Blog at 12:00 AM