It's Time To Read An Award Winner

I was able to watch the livestream of the ALA awards on Monday. There were some surprises, some excitement for the winners, and some sadness for some great books and authors that didn't get recognized.

I love adding to my TBR stack and often the books will sit there for quite a while before I actually get to reading them.

Genesis Begins Again by Alicia D Williams is one award winner that was already on my TBR pile, but after Monday when it was recognized by the Newbery Committee as an honor book and the Coretta Scott King new talent award, I knew I had to bump it up to the top of the heap. 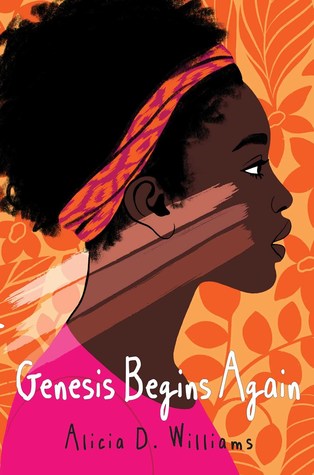 Genesis Begins Again is an amazing novel.  I loved every page, and was sad when it was over.

Genesis has always found herself lacking in many ways.  Unfortunately this seems to be reinforced by classmates, and even her grandmother and father.  One of the things she would most like to change about herself is her color.  Genesis isn't light skinned like her mother or grandmother. She looks just like her father, a dark skinned man.  Her gums aren't pink; they are eggplant.  And she is often made fun of at school and called names.

To add to her problems, her dad is addicted to gambling and drinking and Genesis and her parents keep getting put out of the homes they live in because they can't pay their bills.

Finally, after the most recent move, Genesis finds a friend in Sophie.  Sophie has her own issues, but she is able to help Genesis see some good in herself. She's also found another friend who is helping her in math, and a teacher who recognizes Genesis' musical talent.   Even though her grandmother and father seem to tear Genesis down, there are people in her life who are trying to lift her up.

I've read several books with racism as the theme, but this is the first time I read an honest story about how dark skinned people are treated compared to light skinned people.  This is such an important story to have out there for our kids (and adults) to read.  Williams has managed to tackle a tough topic in a way that is authentic and honest, and certainly needs to be something that people understand and know about.

I'm not sure what award winner I'll pick up next, but I'm so glad I made time for this one!
Posted by Tina's Blog at 6:15 AM