I've got one last look back at the books I read in 2019, today featuring the YA and middle grade books I enjoyed.

As a middle school librarian I am surrounded by books for tweens and teens every single day and my TBR stacks will never get smaller.  I absolutely love the literature authors are providing for my readers and love recommending books to them that I've enjoyed myself. 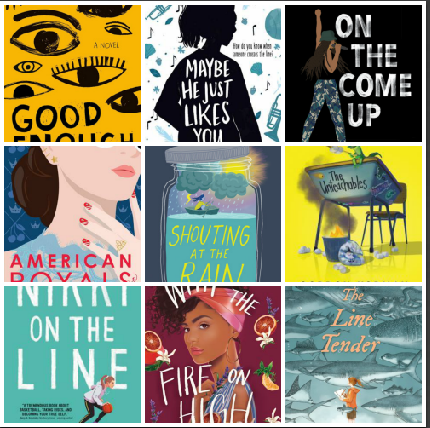 1.  Good Enough by Jen Petro-Roy- Riley has long had feelings of not being good enough.  One thing she does have control over is her weight. Now Riley is too skinny, starving herself every day and her parents have taken her to get treatment.  This story has some fantastic advice for any reader and although I've read book about eating disorders aimed more at teens, this one is definitely accessible to a little younger audience.  Petro-Roy's book is somewhat autobiographical and that brings authenticity and honesty to Riley's story.

2.  Maybe He Just Likes You by Barbara Dee - I haven't stopped thinking about this book since I finished it this past summer and know that I could hand this off to nearly any female and they could relate to Mia in some way.  Mia is in middle school, developed early and is now the recipient of random hugs from boys.  These hugs are asked for randomly, sometimes for made up reasons, but they make Mia feel uncomfortable. When she realizes that the boys are touching her as a part of a game they are playing with each other, Mia has had it. However, Mia isn't sure there is anyone she can turn to who will help her deal with this, and some of her girlfriends make her feel like she is blowing things out of proportion.  This book will definitely make you think about what constitutes harassment and what is harmless flirting and how boys and girls treat each other.

3.  On The Come Up by Angie Thomas- this is Thomas' sophomore novel after her hit The Hate U Give.  Bri wants to be a rapper and enters rapping competitions in the area. She's got plenty of other things to worry about as well - her mom is clean right now, but struggles daily to provide the necessities they need to survive.  When Bri gets some attention for her rapping, she realizes that the words she puts to music do matter and the message she is putting out there isn't really what she wants to be known as.

4.  American Royals by Katharine McGee - this is just the first in this series, with a sequel expected in fall 2020. That still seems too far away. McGee has created a story centered around an American Royal family, as if General George Washington was offered the crown instead of the presidency.  Now we meet his descendants: Princess Beatrice, who is first in line to the throne, Princess Samantha and Prince Jefferson.  All have their own stories and drama and as the first book ended, there are plenty of unresolved issues I want to know more about.

5. Shouting at the Rain by Lynda Mullaly Hunt- I think Hunt gets better with each book she writes. Her first book was amazing and they just keep getting better. Delsie has always lived with her grandmother, but now she wishes for a normal family. Her best friend seems to have found someone else she'd rather hang out with as well. So Delsie starts spending time with Ronan, who has endured some tough times himself.  Hunt's book is so well written that I found myself  bookmarking different pages because I wanted to re-read and remember them.  In addition, the story is heartwarming and hopeful.

6.  The Unteachables by Gordon Korman - this may be my favorite of Korman's books ever.  We've got a burned-out teacher who is just counting down the days to retirement that has been assigned a group of special ed students who are unteachable for the school year.  We find out there's more to Mr. Kermit than meets the eye, and that despite his poor attitude about his job, he really does care about the students he has been assigned....and slowly, the unteachables are learning and Mr. Kermit is finding a passion for teaching again.

7.  Nikki on the Line by Barbara Carroll Roberts- this is a little known gem, but I loved Nikki and her passion for basketball. She is chosen for a club team that is expensive, and her mom agrees to spending her hard earned money on Nikki's passion, but Nikki has to keep up her end of the bargain.  There is friend drama as well as Nikki's realization that the competition on her new team is a lot harder than the team she previously played on. This is realistic middle grade fiction at its best

8.  With the Fire on High by Elizabeth Acevedo - I loved Acevedo's Poet X, a novel in verse, but I might love this one even more.  Emoni has dreams of becoming  chef, but she knows that she has many hurdles to overcome in order for that to happen. She's a single teen mom and is devoted to her young daughter and making something of her life but she knows how people see her because she had a baby when she was just a freshman.  She lives with her abuela who believes in Emoni and helps with the baby, but money is tight. When a culinary arts class is offering a trip of a lifetime, Emoni wants nothing more than to take advantage of the opportunity, but she's got a lot of responsibilities on her shoulders and her dream might always remain a dream.

9.  The Line Tender by Kate Allen- I don't rank my books, but if I had to pick just one middle grade novel I loved this year, The Line Tender would be it.  Lucy's mom was a marine biologist who died while doing some research. Lucy is still grieving her loss, but she and her dad and a group of friends and neighbors are helping her get through this together.  When Lucy is confronted with another loss again, Lucy reaches out to her father and one of his friends as she looks to find the Great White shark her mother loved.  You might need a box of kleenex while reading this one, but the tears are worth it.

I still have stacks of books in my office at home I would love to get to as well as the ones I've brought home with me.  It's an abundance of riches which is delightful.