Yesterday I shared my list of ten favorite nonfiction books I read in 2021. Today it's time for my favorite fiction books I read this year.  Although I did read some backlist titles, the ones I chose for this list are all 2021 releases.  As with the nonfiction titles, I still have a stack or two of fiction books that I want to read, but have quite simply run out of time in 2021.  This year has been full of great books, and these are the ones I read that stand out. 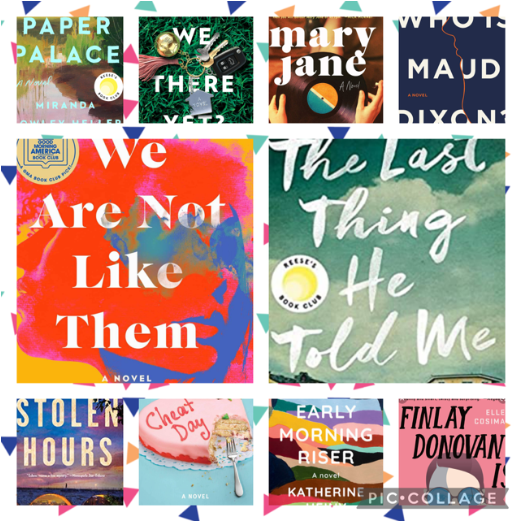 1.  The Paper Palace by Miranda Cowley Heller- this was a Reese Witherspoon book club pick and full of the character development I love in books. Elle is fifty years old, married and a mother to three children.  She and her family are spending time as they always have in a cabin along with Elle's long-time childhood friend, Jonas and his family.  Elle and Jonas have always been close, but decide to act on their feelings for each other.  Throughout this novel it is Elle's thoughts you hear as she tries to decide how she should move forward with her husband and with Jonas.  There are also some rather disturbing events in Elle's past that made me think about the impact these events had on her and the choices she makes.  These characters felt real and I absolutely loved this book.

2.  Are We There Yet? by Kathleen West - this is the second book I've read by West and she has quickly become a must buy author for me (her third book Home or Away will be published in March 2022).  West skillfully creates novels and characters that I can easily identify with. In Are We There Yet? Alice, the mom to a second grade daughter and middle school son, finds her life imploding as she learns that her daughter is struggling in school - and that her son is being accused of bullying.  Alice finds her own reputation hurt by her son's postings on social media as other parents judge her and her parenting.  I think most parents can see themselves in West's characters; there are some real nuggets of wisdom to be gleaned from her stories.

3.  Mary Jane by Jessica Anya Blau -set in the 1970s in Baltimore I loved the time period of this novel that captured the 70s so well.  Mary Jane is fourteen when she is hired as the nanny of a local doctor's daughter.  This household is so different from the one in which Mary Jane is growing up: clutter everywhere, a mother/wife who doesn't know how to cook, and a laid back attitude about everything.  A rock star moves in for a bit as the doctor (who is a psychiatrist) tries to keep him from relapsing and Mary Jane finds herself having the summer of her life - until her mother finds out how Mary Jane has been spending her days.  No matter what happens, this summer will be one Mary Jane will never forget.

4.  Who is Maud Dixon? by Alexandra Andrews- this book might be the sleeper hit of the year and one I still recommend to anyone looking for a good book.  Florence is dreaming of being a writer herself someday working in the publishing industry until she lands a job as an assistant to famous writer Maud Dixon. Maud is extremely private about her identity (her real name is in fact Helen) and Florence accompanies her on a trip to Morocco where Maud/Helen is doing research.  After an automobile accident Florence finds herself in the hospital and Maud/Helen nowhere to be found.  Why not just take up Maud's identity herself? There are a few twists to this one I didn't see coming and I loved the premise of this novel.

5.  We Are Not Like Them by Christine Pride and Jo Piazza -this book is a perfect pick for book clubs - there's plenty to discuss.  Riley and Jen have been friends since childhood. Their lives have diverged recently; Riley is driven to become the first Black news anchors in Philadelphia. Jen has married a police officer and awaiting the birth of their first child.  When Jen's husband is involved in the shooting of an unarmed Black man, the two friends find it difficult to talk - and many of the topics they have always glossed over and ignored are ones they now need to talk through.  I think this one is particularly timely considering current events and addresses issues we should all be willing to talk about.

6.  The Last Thing He Told Me by Laura Dave- I picked this one up and nearly devoured it in one sitting.  Owen disappears leaving behind a note for his wife that says "protect her."  Instantly Hannah knows Owen means his daughter, Bailey.  Soon the FBI and federal agents are asking about Owen and it becomes obvious that there is a lot about Owen that Hannah never knew.  Hannah and Bailey set out to find out who Owen really is and what secrets he has been keeping. I couldn't turn the pages on this one fast enough.

7.  The Stolen Hours by Allen Eskens - I love Eskens books and I feel like with each new novel his work just keeps getting better.  I love the Minneapolis setting, and the suspense of this book.  Lila has finally moved past being attacked eight years ago, but as a woman is pulled from the Mississippi River, barely alive, it brings back memories of what happened to her. And as she starts to work on the case, the similarities between what happened to her and this woman are too alike to ignore.  I am hoping that we see more of Lila in future books because I loved the legal thriller aspect and would love to see her solve some more crimes.

8.  Cheat Day by Liv Strattman - Kit and David have settled into married life and have an easy, happy relationship.  However, Kit is always restless - and perhaps jealous of her husband who has a fulfilling career.  Kit is the manager of her sister's bakery, a profession she somehow finds demeaning.  When she strikes up a friendship with Matt, a carpenter doing some work at the bakery, the friendship doesn't remain platonic.  I found this book interesting as I still liked Kit but didn't agree with her decisions and the way she treated her husband.  And yet, I kept rooting for them.

9.  Early Morning Riser by Katherine Heany - Jane teaches in a small Michigan town where she decides to live after college. She begins dating Duncan, a nice guy who has had a relationship with nearly every available woman in Boyne City.  In fact, he's still great friends with his ex-wife and her husband. The book is set during various points in Jane and Duncan's life and we see their day-to-day existence change as they begin by dating and eventually watch their children grow up.  There's not a lot of drama or a fast moving plot, but I loved, loved this book about an ordinary couple with ordinary lives.

10.  Finlay Donovan is Killing It by Elle Cosimano - Finlay is newly divorced, struggling with money -and if that isn't bad enough - accidentally is mistaken as a hit man and is expected to be a killer for hire.  And things just get worse when the man Finlay is supposed to kill does actually die - and she has his body in her van.  Part of this book will make you laugh, and part of it will have you turning pages rapidly.  I'm so glad there's a second Finlay book coming out soon.  I could get used to reading a lot of stories about this character.

Every single one of these ten was fantastic and although I'm sure I missed reading some great books in 2021, I really did have a fantastic year full of good books.  I'd love to know if you've read any of these and what you thought of them.

I've read and enjoyed (5) from your favorite's list Tina. Stolen Hours made my top 10 as well. Hope 2022 is a great reading year for you.