Monday Mini-Reviews: It's The Last Monday of the School Year

I started this post this morning right before I left for work, and haven't had a moment to even think about writing anything until dismissal time.  This is the reality of the end of the year.

Tonight we will celebrate my husband's 50th birthday by going to a restaurant for supper and giving him the birthday present which is a duplicate to something he happened to order the same day I ordered his gift. Seriously!?  UGH

The state track meet consumed the weekend but it was a lot of fun.  So, now we are hitting the last week and a half of school hard and getting a lot of things accomplished (except leisure reading). 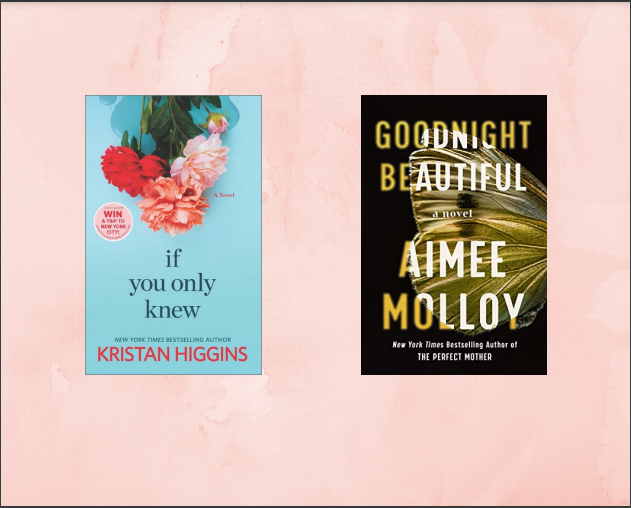 I had a little time to read on our way to and from Des Moines and loved both books I read.
If You Only Knew by Kristan Higgins was my third book by this author. I noticed that everything I've read by Higgins I've given five stars to. I love her books.  This one is narrated by two sisters, Jenny and Rachel. Jenny is a wedding dress designer that is opening her own shop in a small New York town.  She's newly divorced, but is still friends with her ex-husband and his new wife who is due to have a baby soon. (For the record, Jenny wanted children, but her ex, Owen, didn't want any - until he married his second wife, that is).  Rachel seems to have the perfect life: adorable triplet girls, a loving husband a beautiful home....but when Rachel intercepts a text (which is really from his mistress who is sexting him) meant for her husband, things quickly go downhill. Although she always envisioned infidelity as a dealbreaker in her marriage, now that she's faced with it personally she isn't so sure. Jenny's got her own problems with relationships...her new landlord seems to be interested in her, but despite the fact that sparks are flying, he continues to tell Jenny he can't be in a relationship. I love Higgins' ability to create characters that seem real and for the way she allows them to solve their problems. In this novel there is no pretty bow wrapping everything up at the end.  I have thought about the other novels by Higgins long after I turned the last page, and I am sure this one will be the same.
Hello Beautiful by Amy Molloy is my first time reading this author's work, but it won't be my last. This is a fast read, a great psychological thriller that has twists and turns that are unpredictable.  Sam and his wife Annie seem to have it all. They are newlyweds still celebrating each week of marital bliss. But Sam has some secrets- namely the fact that he's spending more money than he has, hoping that the two million dollars he is supposed to receive from his father will eventually be deposited in his account. But Sam goes missing and no one will believe Annie when she claims that he would never leave her.  Once they realize how in debt he is, they're sure he left because of that.  But Sam is narrating part of this story, too, and this is when things get all twisty and interesting.  I loved how hard it was for me to put this book down.  I will definitely be picking up Molloy's first novel and enjoy her writing style immensely.
I'm not holding my breath that I'll find time to read anytime this week - or maybe even next week. However, I've seen several fun summer reading lists that have caused me to purchase a few titles and I've put several more on hold at the library.  I love having such a huge amount of great books to choose from.
Posted by Tina's Blog at 12:57 PM