And today, it's time to take a look at the fiction I've read this past year.  There are so many great books to choose from, that I certainly could highlight more than nine, but I've picked these nine and stand behind all of them as great books to curl up with and enjoy. 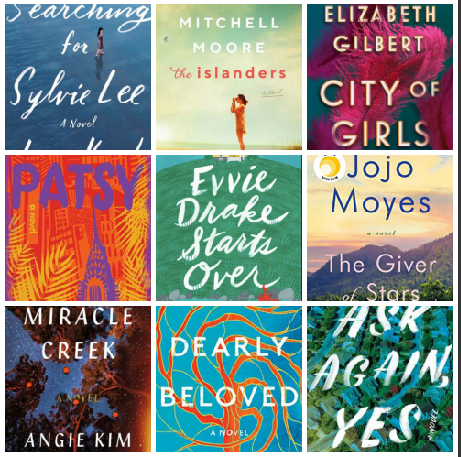 1.  Searching For Sylvie Lee: A Novel by Jean Kwok - I loved Kwok's first novel, Girl in Translation and was fortunate enough to meet her at BEA in May, right as her book was being published. Sylvie- beautiful, successful and the oldest sister flies to the Netherlands to see her grandmother before she dies.  Younger sister, Amy, eventually flies there herself to try and locate Sylvie who has gone missing.  Family secrets abound as Amy learns more about the family she has never met.

2.  The Islanders by Meg Mitchell Moore- Moore is a favorite author of mine and this novel set on Block Island was a perfect book to have along on our time at a cabin in northern Minnesota.  Anthony, a best-selling author arrives on Block Island licking his wounds after some unfortunate events in his personal and professional life.  Joy, a single mother runs a whoopie pie restaurant is struggling to connect with her teenage daughter and is upset by local competition that has arrived on the island, and Lu, a mother of two young boys is on the island growing her blogging business secretly as her surgeon husband commutes to the mainland.  All storylines intertwine by the novel's end which was satisfying and enjoyable.

3.  City of Girls by Elizabeth Gilbert- Gilbert is not one of my go-to authors so I was skeptical about this novel which is a story set in the theater scene in NYC (also not my thing), but I absolutely loved this one.  Vivian narrates her own story as an older woman reminiscing about her youth in New York City living in her aunt's house with actresses after being kicked out of Vassar College.  When Vivian makes a bad decision in her personal life, it affects many people and will take decades to truly understand how far-reaching the repercussions.  A delightful book that transported me in both time and place.

4.  Patsy by Nicole Dennis-Benn- is a Read With Jenna book club choice. I love that Hager brings to light little known voices in literature. Patsy finally gets a visa to the US and is excited to leave the poverty in her Jamaican town behind.  She also leaves her daughter behind, promising the young girl they will be reunited soon. Decades pass without this happening and we see how hard it is for Patsy who arrived with the naive idea that her life would magically be better in the US struggle to meet her basic needs.  I so appreciated this immigrant perspective which is full of hope and longing, frustration and fear.

5.  Evvie Drake Starts Over by Linda Holmes - this is another Read With Jenna selection. I'm not a huge romance reader, but this fits the bill and was absolutely a delight to read.  Evvie Drake is a new widow, having lost her husband just a year ago.  She's spent the past year mired in guilt (not grief) and as the story unfolds readers will learn more about their marriage.  When a friend of her friend Andy needs a place to stay, Evvie rents him a room.  Dean is a former major league pitcher whose career is in the toilet as he's suffering a case of the yips. He needs a place to hide and recover from a rough year.  As the two get to know each other, they find there are sparks flying....

6.  The Giver of Stars by Jojo Moyes- historical fiction, packhorse librarians of Kentucky, a little suspense, a little romance, the power of reading and books to transform lives. When all those elements are thrown together into one book, it would be nearly impossible for me not to fall in love with it.  This novel may rank right up in my top ten books of all time (which is a pretty big honor) and it's the book I'll be telling everyone to pick up. I've had several friends read it as well and their reviews have been equally as gushing.

7.  Miracle Creek by Angie Kim - An immigrant family operate a hyperbaric chamber that provides treatment for a variety of problems (autism, infertility). When an explosion kills two of the members of the seven undergoing treatment, an investigation begins into what caused this tragedy. Each chapter provides more clues and background information about the characters, and as I read (quickly turning pages), I found my ideas about who was responsible shifting.  I enjoyed that Kim's characters were all flawed and human which made them easier to relate to despite some bad decisions.  This was impossible to put down from the very first page.

8. The Dearly Beloved by Cara Wall - two men are hired as priests of a congregation. Both came to the ministry for different reasons- one for his faith, one because of his lack of faith. Both are married and their wives also have different faith lives.  While this could have been a rather preachy novel, it is not. Instead Wall has created a story about two men and their wives, struggling with the normal daily challenges and years pass.  There are some rather wise and thought provoking portions about faith and belief that anyone with any belief or lack of belief will be able to appreciate.

9.  Ask Again, Yes by Mary Beth Keane - I love a good novel that centers around family drama and this is definitely one of the best.  Francis and Brian are hired as cops in the NYPD and by chance also become neighbors.  While Francis' wife would love to be friends with the Brian and his wife, they are continually rebuffed. Their children develop a lifelong friendship that turns romantic, eventually, but when Brian's wife is responsible for a tragedy that befalls Francis, the two teenagers no longer are connected as they once were.  Spanning the decades Keane tackles the topics of mental health, alcoholism, and forgiveness with honesty.


These nine novels are ones that book clubs would enjoy reading and discussing and are stories and characters I've thought about long after I turned the last page.  I'd love to know if you've read any of them yourself.

Ask Again, Yes made my top 10 as well. I also loved Miracle Creek.

Great list here! I've only read Miracle Creek and liked it well enough, but not as much as you did. I've got at least 4 others on your list available on either my Kindle or Audible. Looking forward to reading them.