This past week I read two fantastic (and completely different) books. I'm sharing the novel I enjoyed today, but am saving the nonfiction book, The Only Plane In the Sky: An Oral History of September 11, 2001 by Garrett Graff, to review later. 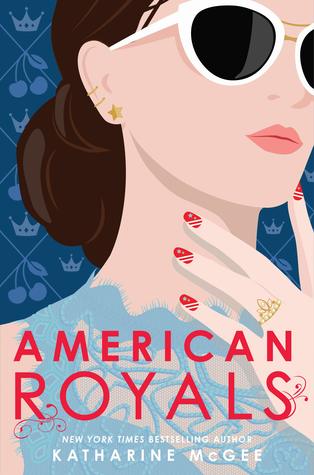 I've loved the British Royal Family since I was about nine years old and still love reading about them and seeing the pictures of their families in the news.  McGee's novel is a fantastic imagining of what an American Royal family would be like for our country.

At first this story felt a little hard to imagine: the US a monarchy?  Dukedoms?  McGee painted a vastly different picture of our country, and at first it felt a little dystopian.  And then, after I got into the story, it seemed entirely possible and realistic.

I loved the multiple narrators that brought several perspectives to this book. I loved reading about their magical, charmed life (that also had its downfalls).  I loved the soap-opera-like feel to this book, and am so excited to see that this story will continue in the fall of 2020 when the second book by McGee is published.

Ten years ago (give or take) I read the Luxe series by Anna Godbersen which is a historical fiction series about wealthy young women in the US.  In some ways, this book reminds me of that.

Beatrice, the oldest daughter, has always fulfilled her role as the future Queen, never taking her own desires into account. Now her father is asking her to marry a suitable young man although Beatrice has fallen in love with someone else.

The twins Samantha and Jefferson are the younger royal siblings who have a lot more freedom in their lives.  Samantha has found a young man she's interested in, but their path to happiness is one that has many roadblocks. Jefferson has broken up with his girlfriend, Daphne, and started dating Samanth's best friend, Nina.  Daphne, however, will stop at nothing to get Jefferson back and wants nothing more than to be a part of the royal family.

If you like reading about the rich and famous and love a novel with plenty of drama, American Royals is a book you won't want to miss.  I wish the second installment was being published sooner and hope this is just the beginning of a long series.
Posted by Tina's Blog at 12:00 AM